Field Notes By The Sea

Listen with the sea, curling over rocks,

oyster, laid open with razor, and clusters of pink and bone white shells.

Listen with the Gulls, see them swiftly rise and fall, hear their call of freedom over footprints. 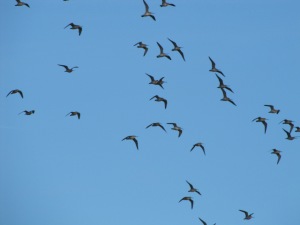 Sit upon a warming rock, 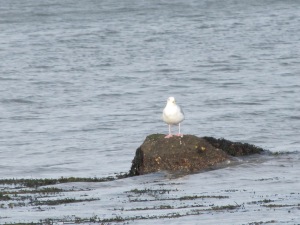 listen to the tide, fill your spirit with the  lullaby,

There is a gazebo at the end of the garden. It overlooks the estuary. When the tide is in, sea water pools around seaweed covered rocks. The sound is peaceful, meditative. I drink an early morning coffee, listen to the birds singing morning songs, watch a spider spin his fragile life between timber beams above my head. Even in the harshest of winters, the rise and fall of tides, sun-light on water, movement of sky, cloud, moon and stars, allows an awareness of nature behind the mask of perceived reality. I offer my words and pictures in celebration and gratitude to God, for allowing me a glimpse behind the mask. ~ ~ ~ ~ ~ ~ ~ ~ Bio: Teri Flynn was born in Wales of Welsh and Irish Parents. Educated in England, she moved to Co.Waterford, Ireland in 1997 where her Poetry has since appeared in “The Turning Tide” – an anthology of new writing from Co.Waterford. “Southward” The Journal of the Munster Literature Centre and “Imagine” The Tallow Writers Group quarterly review. Her poetry appears in “Sticky Orchard”, a group effort with Alan Garvey, Jim O’Donnell and Anthony O’Neill and grant assisted by Waterford County Council’s Arts Grant Scheme. “Listening To The Grass Grow” with Jim O’Donnell and Anthony O’Neill was published by Edward Power at Rectory press and most recently, in ‘Murmurings’, Remembering Anthony O’Neil, with Jim O’Donnell and Alan Garvey. Her poem Queen Of The Sea was included in the Chesapeake Exhibition at RUH, Bath, 2011. Figurehead Carver, Andy Peters. Photographic display of Ship’s Figurehead Carvings by Richard Sibley – http://www.tallshipsgallery.com A themed display of her oil paintings and poems entitled Cynefin, were on display in Waterford during The Imagine Festival in 2017. Cynefin-pronounced kuh-nev-in is a Welsh word meaning habitat or place. A place where a being feels it ought to live, where nature around you feels right and welcoming.
View all posts by maskednative →
This entry was posted in Life, Love and the Universe and tagged freedom, gulls, Listen, lullaby, rocks, sea, shells, song, tide. Bookmark the permalink.

10 Responses to Field Notes By The Sea